The Lund C rail platform was when we first stepped onto Swedish territory. En-route, Copenhagen to Stockholm, Lund C is where we changed from a local service to our overnight sleeper train. The sleeper train pros are obvious – cut one night of hotel costs and save daytime hours in transit. No need for airport hassle or spending 4 to 5 hours on a day train. In the end, we liked the night train and would do it again. Our service pulled into Stockholm central station just a few minutes late at 06:15.

We found very little info about the Copenhagen to Stockholm sleeper train beforehand so I’ll describe it a bit and have posted below a montage of interior snaps. First, make your booking on the Swedish train site and print your tickets in advance. The American based euro train website is much more expensive, FYI. Book direct. One can choose between a standard seat (ouch), a sleeper compartment with 6 beds/strangers (ouch again), a sleeper compartment with 3 beds (getting better), a private sleeper compartment with 3 beds reserved just for you/your spouse/etc (what we choose), or a first class sleeper compartment for one or two. It was my wife and I traveling and we opted for the private second class sleeper compartment. It was fitted with ample overhead storage areas, a sink, and three bunk beds – we used the third bed for storage which made a cramped space much more doable. Beds were pre-made fitted with sheets, duvet, and a pillow. There was enough comfort for one night. However, learn from our mistakes – use earplugs, take an eye mask and your own pillow, and open the window to allow fresh cool air in. It wasn’t until about 2am when I finally slept because it was warm and noisy and too bright. There is a shower on-board (cheap soap and shampoo packets provided along with towels, complimentary) but we didn’t use it. A few waters were provided. We peaked into an open first class compartment and there wasn’t anything that enticed us. The bed was the same, the size was the same, just a slightly nicer wood interior and a shower en-suite. For us, not worth the extra. 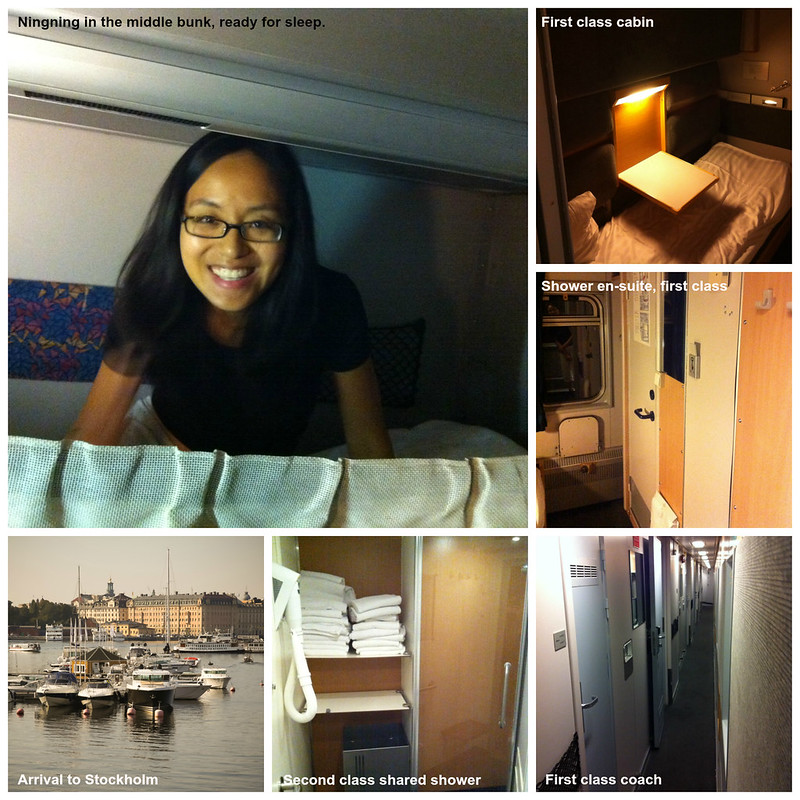 I’m Starwood Platinum and used my Your24 benefit for an early check-in at the Sheraton Stockholm. Thank God for the early check-in! Our suite was waiting when we arrived just after 06:30 (the hotel is a 5 min walk from the station-exit on the lower ground level and walk towards the water). A hot shower and some restful, cool and quiet sleep was pure bliss. Speaking of the Sheraton, staff were great at the front desk, restaurant and lounge. Thanks for a great stay. Two nights we had a Jr Suite (201) and the last night we moved to a Superior suite (218-219). Either are great suites and we actually preferred the Jr Suite (Sheraton-please install a Nespresso machine like in the Superior suite). The superior suite benefit’s from a 145 deg view looking out to city hall and Gamla Stan, a separate and larger lounge room, and said Nespresso machine. But you lose the bidet in the bathroom. Sheraton Stockholm has a club lounge. Strongly recommend you upgrade to a club room if staying with them. There is complimentary beer, wine, cava, liqueur, and h’orderves between 17:30 and 19:30 which can save you a fortune in drink costs in Stockholm! One night they even had spare ribs as snack. The hotel has a sauna in the men’s and women’s fitness centre changing rooms. We enjoyed relaxing here and it was nice to have a little separation once in a while. 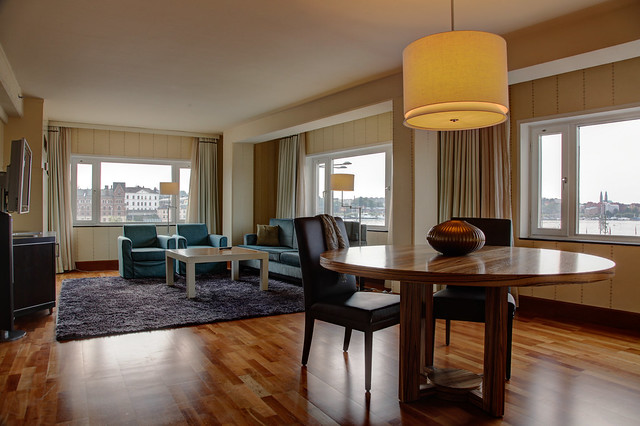 Transit and hotel aside, let’s get to the city and it’s charms. My wife and I are walkers and that’s how we toured the city. No cruises or bikes, just Crocs and Nike’s. Stockholm is made up of 14 different islands and we made it onto at least 5 – Gamla Stan, Djurgården, Slussen, Skeppsholmen, Södermalm. Weather was nice. Temperatures hovered around 19C, sunny or partly cloudy until rain started to fall in the last hours of the last day.

Stockholm’s highlight for me was visiting the Vasa museum. In the 1600’s the warship Vasa was constructed to help Sweden demonstrate power over Poland. King Gustav II Adolf had the ship built with two decks of canons. Vasa was ornate, colorful and also first of its kind with the dual deck of canons. After 2 years the ship was ready to sail. However, there was a problem. Tests (by having 30 men run side to side on the top deck) proved the ship was top heavy – too little ballast could be put in the narrow bottom and the ship was built too tall with too much weight (the canons) up top. Gustav II was in Poland waiting for the ship so they sailed anyway. Vasa’s maiden voyage lasted for exactly 1,300 m before a wind gust toppled the ship, water came into the gunner portholes, and the grand ship sank right in Stockholm harbor! Imagine the onlookers horror seeing the Swedish pride sink. Circa 50 men and women (women were on-board for the ceremonial journey) lost their lives. A later inquest was indecisive in determining fault. But the story just starts there. For over 300 years this ship sat in Stockholm’s harbor. The water here is unique as it doesn’t have wood eating bacteria. That fact allowed, in the early 1950’s, a salvage company to raise the Vasa mostly in-tact. Some canons and the top masts were missing – but 98% of the original ship was surfaced. Over the next fifty years, a team preserved the Vasa using specialty methods. A museum was built around the ship and in 2000 the Vasa museum opened to tourists. Today, you can walk by the Vasa at 4 different levels. You can’t walk on it but around it. The museum is brilliant showing you models of how the colorful ship would have been painted and models of how the ship was raised/salvaged. We spent good part of a day reading and looking. The only bit you can touch – which I did – was some ballast stones and three canons. Venture down into the lower ground level and the museum has reconstructed faces of about 10 sailors and women who were on-board. The reconstruction comes from carefully studying the bones found – which you can also see laid out. A bit scary but very neat. We recognized just how malnutritioned many of the sailors were.

Let me sidetrack for a minute. A friend had recommended the Swedish author Jonas Jonasson and the book “The Girl Who Saved the King of Sweden“. What a great read brought to life while visiting Stockholm. I highly recommend the book. It’s light hearted, written in a different style which traditional English teachers won’t approve of, and has a (tiny) bit of history thrown in. I’m now reading her first book entitled “The 100-Year-Old Man Who Climbed Out the Window and Disappeared”. It’s starting out funny and enjoyable…

Stockholm food (and most other things) is expensive. Know that before you visit and just get over it so you can enjoy the city. We’ve lived in Moscow, Tokyo, and London and found Stockholm food really pricey. The thing is in all other places you can find different tiers of food – expensive and posh, nice and middle-class-ish, good local dives with cheap alternatives. Stockholm only has the first two tiers.

A few parting thoughts. English is prevalent all over. Sweden is included in the 3 mobile Feel At Home programme so you can use your 3 minutes/data in Sweden for free. The easiest and the best value transit to Skavsta airport (which isn’t the major airport!) is by using flygbussarna. And watch out for the taxi’s. Stockholm taxi’s are deregulated which means they can set any fare they wish as long as it is disclosed. Each taxi displays the max fare for a standard journey next to the door. Major taxi companies are circa 320 SEK for the journey. But we saw as low as 200 SEK and as high as 998 SEK! Watch out and look at the price before jumping into a taxi. 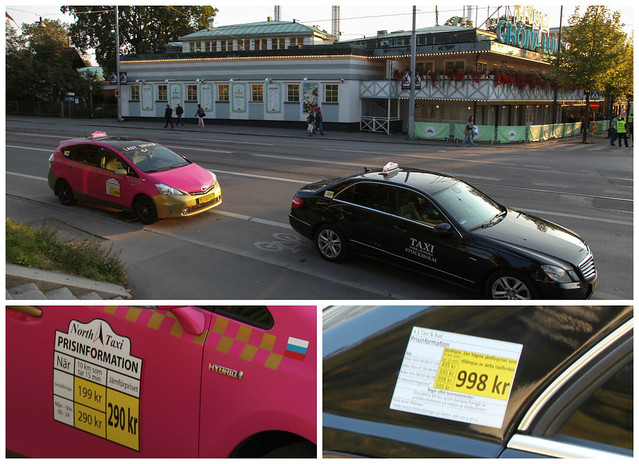 Stockholm concluded our summer of travel! In little under a month we trekked to Santorini, Athens, Rome, Amsterdam, Copenhagen and Stockholm. Ningning and I so enjoyed the trips together but we’ve missed our little girl. Gg and Nana, ie. grandad and grandma, on the other hand have been blessed by Vivi. Actually the blessing goes both ways! Time to kick-start the routine again and get back to real life.