Athens was beautiful yet dirty, historic yet modern, and sprawling yet you are left wanting to only explore the centre. My wife put it best when she said Athens today looked like Shanghai 20 years ago. That gives this bankrupt city some promise. Viewing the Acropolis site and especially the Parthenon has been on my bucket list. The Acropolis is a flat stone mountain with several historic temples and monuments on top including the Parthenon. Along the climb up are two theatres. Just off the base of the mountain sits the Areopagus which was the judicial center of Athens. The city then protrudes out from the Acropolis.

We arrived to Athens from Santorini after midnight and were treated to our first Acropolis viewing at breakfast. The King George hotel, Syntagma Square, offers breakfast on the 7th floor Tudor restaurant. You can eat breakfast while gazing out to the Acropolis. Stunning. Closer, across the street, is the Parliament building where you can watch the changing of the guards hourly. Speaking of the King George, a SPG luxury collection property, we were upgraded to a Grand Deluxe suite. The two room living plus bedroom suite (112K) was grand with classic furniture, high (not truly vaulted) ceilings, and a comfortable yet tight bathroom. The room view was horrible being a courtyard view; internet access was decent around the whole hotel. Hotel staff were prompt and accommodating. The fruit at breakfast, namely the watermelon, peaches and figs were fresh, sweet and wonderful. Don’t forget they have fried eggs, pancakes and waffles on offer but you have to ask. Indulge in their fresh yogurt and Greek fir honey.

The day was hot, nearing 32 C, and the sun was beating down hard. The Acropolis was our destination. We set out late around 14:00. Hadrian’s arch was the first thing we saw on our walk. (Note the Acropolis ticket gets you access to about 7 sites and is valid over 4 days. Current price is €12.) It’s definitely more impressive to see from the hills rather than across traffic. We took the northern Acropolis slope which takes you first past the theatre of Dionyious. It is quite in-tact one of the best preserved theatre’s in the country. You are permitted to sit in the grand stands! If you visit, notice the VIP chairs in certain central spots. Next on the walk is the Odeon of Herodes Atticus. Appears they have reconstructed the theatre and use it still today for special events. Keep climbing, and you go through a maze of relics some which date back to 500+ BC – which is simply mind-boggling. (Makes you think, Jesus walked on earth not that long ago!) The top of the hill approaches and you see the temple of Athena Nike. Story goes that after the goddess Victoria helped the Athenians beat the Persians the temple was constructed. They built it at the front to proclaim their power! You can wonder amongst the Parthenon, the Propylaea, the Central gate and the Erechtheion. On one hand it is amazing to think about the history which occurred on the Acropolis site, on the other hand it’s sad to think that generations believed in the ‘power’ of these gods and built such inspiring structures to honor them.

Partway climbing up Ningning asked if Athens was mentioned in scripture. We researched and saw Paul’s famous Christian sermon was given on top of Areopagus. We kept seeking the ‘big rock’ or ‘Mars rock’ until we found it on our descent.

Over the next days we took opportunity to visit the Roman and ancient agora’s (market places). Both were well destroyed – the Roman agora more so – but interesting none the less to see. We were surprised by all the relics just lying around. Want an ancient column? A building stone with inscription? It is all just lying around dis-used and not protected. We saw the reconstructed two story Stoa of Attalos building and the very well preserved Temple of Hephaestus. Finally, we wondered over the grave site at Heritdus.

Athens city, beyond the historic sites, wasn’t impressive. Each part of town is a separate pocket of shops. For example, all the fabric shops are in one area, the home shops in another, the workman tools shops in yet another cluster. That was a bit different. Also, we saw very few super markets and loads of specialty boutique shops. A nice change from what a city normally holds. We toured the flea market area and the fish/meat market – but spent very little time in both.

The King George permits guests to use the spa and pool (-1 floor) at the neighboring SPG property, the Grand Bretagne. Ningning and I visited several times and really enjoyed the facilities. They have more than just your normal steam and sauna room. We liked the Herbal Steam Bath, the indulging Amethyst Grotto steam room and the Laconium. The pool has a Jacuzzi set one end which is great for a dip between steam rooms.

Another trip favorite was seeing the Delphi ruins. About 180km north, in a quite remote area, sits this famous UNESCO world heritage site. We hired a car (Enterprise have a location about 1.5km or 2 metro stops from Syntagma square) and did a day trip to Arachova/Delfi. Driving in Athens city centre was harrowing. You are constantly cut up by motorbikes, scooters, and taxis. Greek drivers don’t generally obey posted signs or stoplights. You have to drive defensively! Outside the centre was more normal and really enjoyable to drive. Be careful though because the speed limits change constantly and unless you are a speed demon you will get passed on double yellow lines all the time. The country must have gotten a great deal on excess speed limit signs – within 1 km the speed could dip from 120km/hr to 110 to 90 to 100 back to 120. Seems they try to reduce the speed at ‘larger’ road junctions. And the motorway (we were on the E75) goes from each lane being a different speed to all lanes being the same speed. Just weird and nobody obeys the limits anyway. 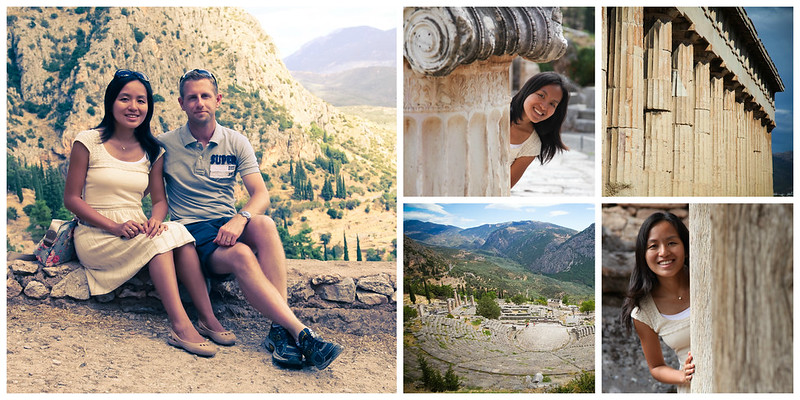 Delphi was huge. You climb through temple ruins, altars, a theatre, and more until you reach the stadium on top. It’s well worth the climb to see the stadium where about 18 people wide could participate in one race. Like the Acropolis, you get lost in the history, admire the Before Christ built ruins, and experience sadness at what it all represented. It was hard to capture the site in pictures. We think the best view would be from a drone flying over the site! (As of this writing we could not find any footage on YouTube.)

Arachova, just south of Delphi, is a beautiful ski resort town. The view is awesome as the elevated town sits in between two mountains. They make some semi-famous fettuccine noodles and a mild grilled cheese. We tasted both over dinner as we ate the cheese for an appetizer and lamb with fettuccine & lamb with vegetables for mains. Our other food experiences were good – nothing extra ordinary. We had the typical gyros (really nice from a shop on Emrou west of the church), a good lamb and chicken dinner around the old town area, American hamburgers one night, and a bit of frozen Greek yogurt.

In summary, we spent a week between Santorini and Athens exploring the best of Greek beauty and history. We loved the food and experiences. We also just enjoyed being away – just the two of us. We created lasting memories. Now back to see our daughter and in-laws!

Photos are below. Take a close look at the panoramas – we think they best tell the story.